Regarding the decision not to air the DEC Gaza Appeal:

The BBC says that they don't want to compromise their commitment to impartiality. This is no excuse - the BBC is biased, as I made clear in the letter I recently wrote to the Foreign Office:

Yesterday I sent this comment to the BBC’s ‘Have Your Say’ question of ‘ How Can A Truce Be Achieved In Gaza?’

“We’re not going to get anywhere without honest reporting. In your brief summary you said during the recent ceasefire that Israel had eased it’s blockade. That was a condition for truce but was never enacted. You also failed to mention that 49 Palestinians were killed during this period. The west has made out that Hamas is to blame for the breakdown but the truth is to the contrary. If George Bush had any morals he would rein-in Israel NOW!”

Only a few days ago the BBC reported Gaza as, ‘looks like an earthquake.’ I could go on here about the humanitarian crisis but I’ll just say this:

Didn’t they hear about Gerald Kaufman MP describing the Israelis as acting like Nazis in the House of Parliament?

Haven’t they heard that charges of War Crimes are being filed against 15 Israeli officials, including senior members of their government?

I’m struggling with belief now that they are resisting their own government's urgings to reconsider their decision – a government I am usually railing against but right now I agree with Douglas Alexander and seriously suggest that the BBC have a rethink!

[Yes, listen to the man, his interview on now – he might respect your impartiality but he’s right there! YOU’RE ON THE WRONG SIDE OF THE LINE!!]

The longer they continue refusal of airing the appeal, confidence in their impartiality within this member of the public at least is increasingly waning. I can’t believe that they’re wasting my time having to do this. I hope the protest this afternoon is massive. If there isn’t an imminent reversal, I’ll be switching to Channel 4 permanently!

The BBC is under siege over its decision to boycott a DEC appeal for the people of Gaza, writes Krishnan Guru-Murthy.

The BBC is under siege over its decision to boycott a Disasters Emergency Committee appeal for the people of Gaza and one has to think they will be 'reviewing their decision'.

Channel 4, ITV and Five have decided to go ahead and show a TV appeal on Monday night to raise awareness of the appalling suffering of those civilians caught in the recent fighting. So the BBC is looking increasingly isolated.

Having fronted a DEC appeal for the former Yugoslavia, perhaps my own impartiality on this story is open to question, but it is hard to find anyone who doesn't think this is a mistake at the BBC. [More:-
http://www.channel4.com/news/articles/uk/snowmail+bbc+and+gaza+appeal+row/2910262
Want to keep pressure on?
TO COMPLAIN TO THE BBC

Palestinian Mothers and we, the undersigned, in an expression of our dismay and disgust with the BBC’s decision not to air the DEC Gaza Appeal:

http://tinyurl.com/aplnx9
If you want to make a donation to
http://www.dec.org.uk/donate_now/
& er Tony Benn, doing a Bob Geldoff!
Tony Benn - he's the man! For today on Today:

Ignores host & reads out charity details. Here he is at the demo 28th Dec outside Israeli Embassy 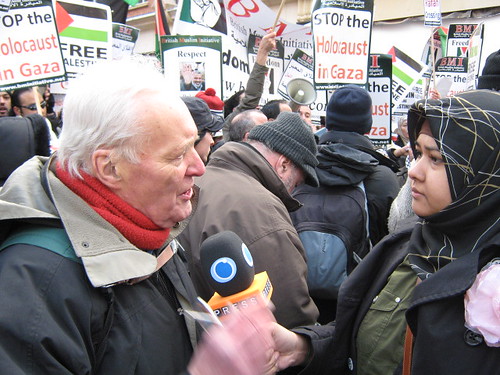